Anyone who wants to participate in the project.

Contributors always have a voice and are welcome to provide thoughts and insights and in any technical discussion within the project as well as assist in direct use/testing of the project artifacts.

A Committer is a contributor that has the authority, and responsibility to submit changes to the ONAP software repository.

Typical characteristics of a Committer are:

The PTL is a committer who is the one point of contact responsible for representing the project to the rest of the ONAP community.

For projects that become part of any given release, the PTL is responsible for reporting milestone status and release readiness to the rest of the community. The PTL for each project is elected by the other committers within the project. Please note that it is very common for individuals to be a committer on one project, and an contributor on another. However, there is nothing stopping an individual from being a committer on multiple projects. Also, it is rare, but not unheard of, that an individual can be a PTL on more than one project.

A change is a portion of code submitted to https://gerrit.onap.org. Sometimes referred to as a 'gerrit' or patch, it is essentially a git commit pushed to gerrit code review system.

To start the promotion process, create a new page by clicking the 3 dots next to the create button and select the  Committer Promotion Template as shown below. After that follow these instructions Committer Management Automation via INFO.yaml: 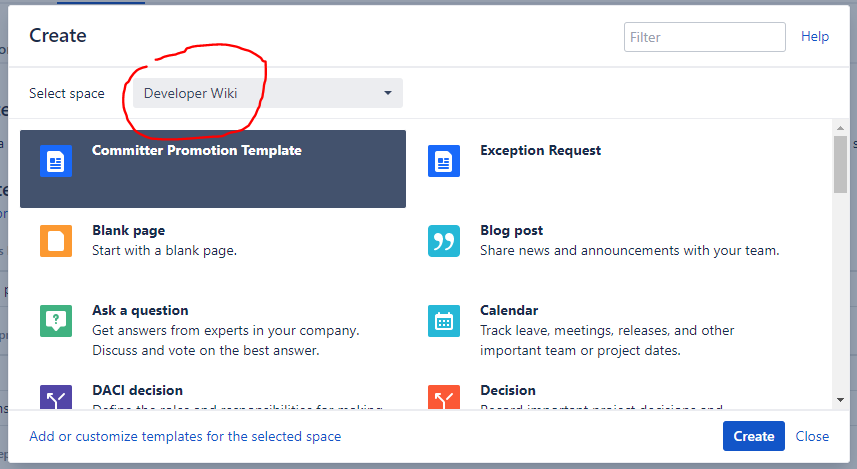