This page will explain the Architectural details of the Integration of SOFTHSM2 with the Hardware plugins (Examples:  TPM Plugin,  SGX Plugin and TrustZone Plugin etc..)

This page will explain the API Design of the same. 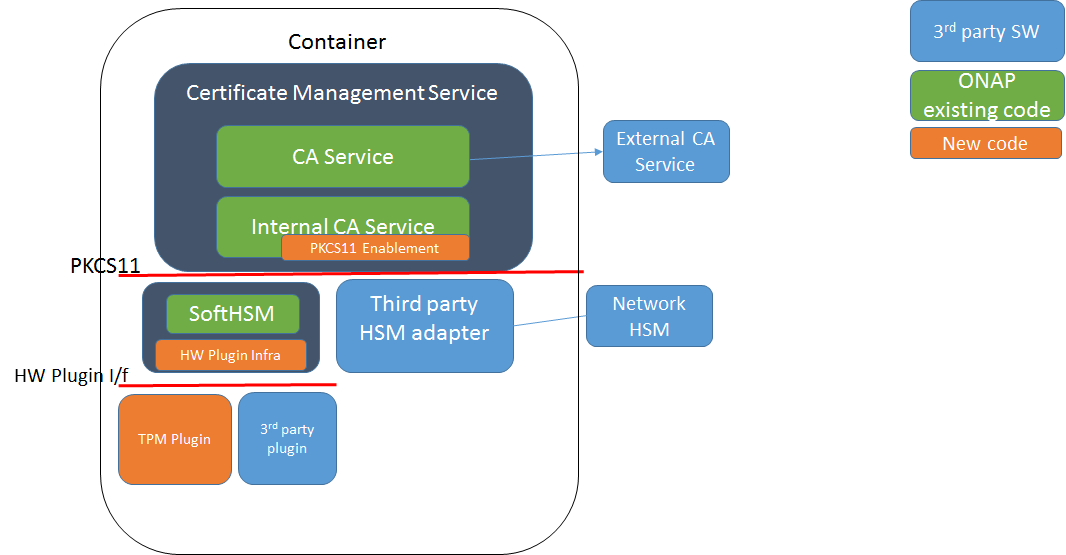 Above picture shows various blocks and interfaces of container that acts as CA for ONAP.

AT&T Supplied CA Service acts as proxy to External CA.  AT&T supplied Internal CA Service (called develCA) acts on CSR locally and returns the signed certificate using local CA key.  CA key is stored in clear in "Internal CA Service".   To secure the CA key (While it is stored in file system as well as while it is being used),  Internal CA service is being enhanced to take advantage of PKCS11 based HSMs (Hardware based security).  "PKCS11 Enablement"  logic makes the CA service to talk to external HSM for any private key operations.

Any PKCS11 based HSMs can be attached to the interface. Since PKCS11 is C API standard from OASIS, it is not described here.

SoftHSM is a project from opendnssec that provides some level of security for user keys.  It exposes PKCS11 interface on north side.  The type of security it provides may not be acceptable for some users. To improve security using HW facilities,  SoftHSM (as part of this project) is being enhanced to talk to hardware security entities.  "HWPluginInfra" is the logic being developed as part of CSM to plugin various hardware security mechanisms.  "HW Plugin I/f" is C API interface to hook various hardware security modules into SoftHSM.  As part of this project,  we also intend to develop "TPM Plugin" which communicates with local TPM chip.  TPM is programmed with the user keys and TPM Plugin uses keys programmed in TPM to realize private key operations.

In summary, CA key security can be realized as follows:

Bullseye coverage tool is used to measure the codes coverage: