The goal of the ONAP versioning strategy is to provide a compromise addressing the following competing goals:

What are the 2 big issues to address?

Issue of dependency on Snapshot

Example of the problem:

Imagine you have your cpt A build working fine. Your build is depending on cpt B SNAPSHOT build.

For some good reasons, cpt B makes a new build. As cpt A relies on B SNAPSHOT (meaning latest build) when you rebuild cpt A if the build breaks you will not know if the problem is within cpt A or within its dependency cpt B.

To address the Snapshot dependency scenario, the idea is to move away from Snapshot dependency to "Release Artifact" dependency only. The word "Release Artifact" is loaded with the sense that the build is stable, has been thoroughly tested and can be used by another team. The "Released Artifact" is available within the "Nexus Release" repo (refer to Nexus section below for further description of Nexus repos). The PTLs and the project team decide on their own when to create a "Release Artifact". This approach allows to truly decouple the builds from each other and avoid the situation where something that was working fine before doesn't suddenly break due to snapshot changes.

The "Release Artifact" dependency also address the fact that "mega build" are no longer necessary.

Issue of identifying which version you depend on

ONAP is composed of more than 30 projects and 200 repositories. Dealing with components dependencies and documenting the version tree for each build can become a Dantesque activity.

In order to know whether you're depending on the right version of a particular artifact, ONAP will be maintaining a master "version manifest" for each named release (e.g. Amsterdam) specifying the version of each component that is to be delivered within a release. The manifest is a structured list of components and their versions. The manifest is intended to track a particular ONAP release and be used to track all versions of all components within a release.

One early idea was to embed the version manifest within the oparent artifact, perhaps as version properties within the POM file that can be directly consumed by downstream POMs. This approach, however, has some issues:

Just think about this scenario:

Now, cpt A version in o-parent needs to be updated

Due to the change of the cpt A version in o-parent, o-parent itself needs to be bumped to 0.9.1.  Now we have a circular dependency.

Each PTLs will need to update the manifest to declare the "Released" version available.  In order to avoid the circular dependency issue, any updates to the version manifest, must NOT require any artifact to be version bumped and re-released.

Understanding the above, ONAP is maintaining a manifest of "Released Artifacts" outside the build process and outside of any binary artifacts.  However, the manifest is still in source control. A specific version of this manifest will be blessed by TSC and used to make the "Named Release" (see definition of "Named Release" below).

ONAP has 2 types of artifacts:

The version numbers are documented in the o-parent manifest. 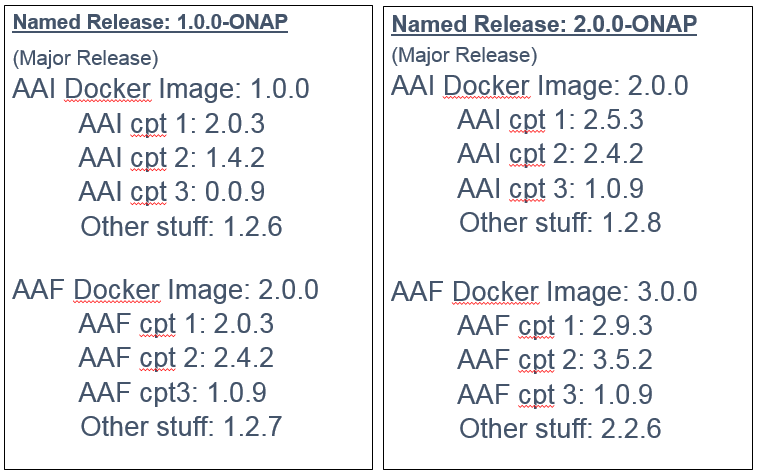 The diagram below has 3 Named Releases (delivered chronologically in that order):

1.0.1-ONAP is a Service Release and is released to deliver (for example) a security issue in "AAI cpt 1" component. Note the third digit is now "4".

1.1.0-ONAP is an Enhancement Release and is released to deliver (for example) a backward compatible functionality in "AAF cpt 1" and "AAF cpt 2" components. Note the second digits are now "1" and "7". Note also there is no version continuity in "AAF cpt 2" between the Service (4) and the Enhancement (7) Releases. This is acceptable as the team may have delivered intermediate "Artifact Release" that were not embedded with a "Named Release".

Given a version number MAJOR.MINOR.PATCH, increment the:

To avoid breaking build refer to Continuous Integration Practice. Yes, CI is the foundation in ONAP.

Builds that have passed CI testing that includes automated deployment of the base ONAP system to either Openstack or Kubernetes and a minimum spanning set of test including Robot testing, selected REST calls up to and including the entire vFirewall use case - will be tagged across all the repos.  This will aide developers, testers and deployers when they wish to target a known working build or reproduce an issue flagged to a particular tagged build.  Using tagged builds will allow use of ONAP away from the head of the master branch.

Branching and Merging in ONAP

At one point in the Release (around RC0-RC1), we have to limit what get into the final Release.

To make this happens, we branch out from Master, create a delivery branch (Amsterdam, Beijing, Casablanca,...), and lock the delivery branch to strictly control what goes into delivery branch. Developers continue their non delivery branch work in Master.
At the end of each Release, artifacts are tag in Gerrit, according to above versioning principles.

Now things happen and we may need to deliver a hot fix (also called patch) into the latest available Release.
To perform the patch delivery, we simply perform the hot fix in the delivery branch, and tag it (1.0.1-ONAP).
Once the hot fix is delivered (and everyone is back to happiness), we will decide how to carry over the changes into the current Release branch (Beijing branch on the case below). Most probably cherry pick technique will apply.
It may also happen that we need to carry over into the latest available Release some fixes or new backward functionalities that were discovered while developing current Release (Beijing). Here too, we will decide on the best options to carry over changes into the current available Release and make a new Release (1.1.0-ONAP).

As a guiding principle, the ONAP community keeps its focus on developing in Master branch. Hot fix process will be more the exception than the rule.

After the delivery branch is created, we will have a very short delivery team to control the final content of the Release. The delivery Team composed of 1 member representing each project will analyze the impact of every defect and decide its inclusion or not into the delivery release. Jira will be used to support all documentation and decisions.
The Gerrit merge process will be limited to the delivery team. 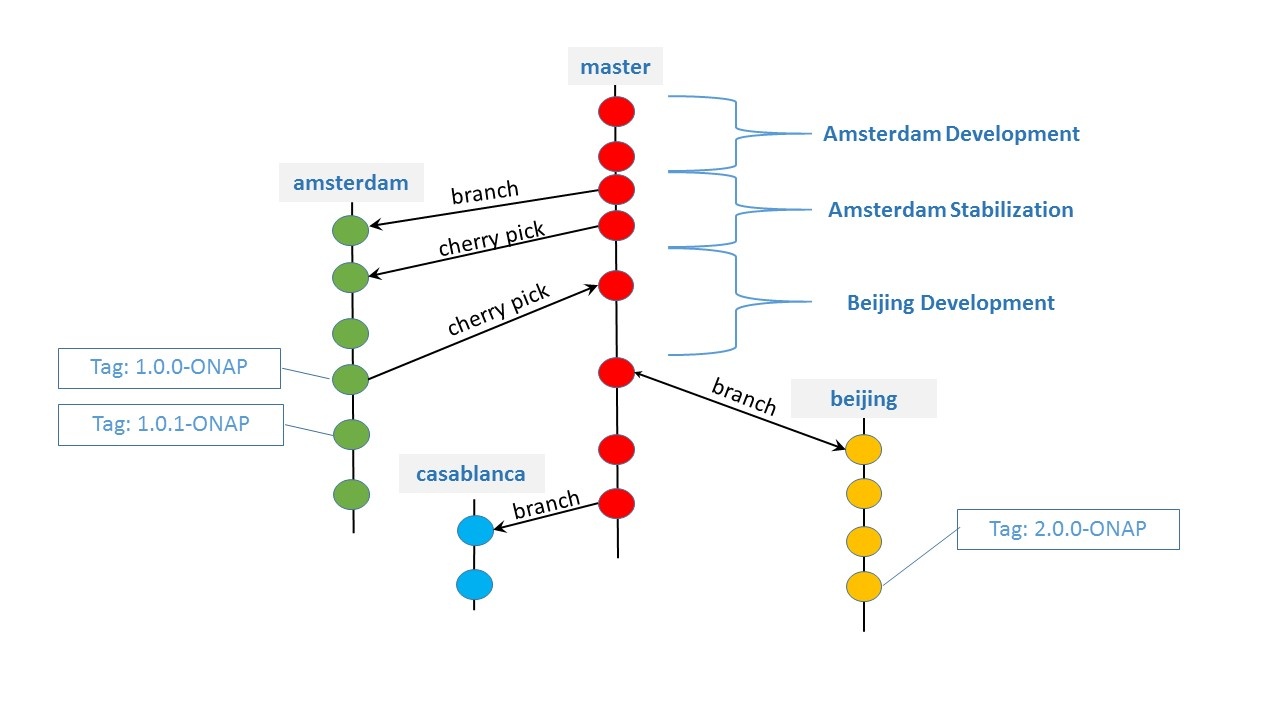 While this addresses a few of the questions below, some thought is required in the relation to a release. Questions to answer: