This proposal introduces the ONAP Platform OOM (ONAP Operations Manager) to efficiently Deploy, Manage, Operate the ONAP platform and its components (e.g. MSO, DCAE, SDC, etc.) and infrastructure (VMs, Containers). The OOM addresses the current lack of consistent platform-wide method in managing software components, their health, resiliency and other lifecycle management functions.  With OOM, service providers will have a single dashboard/UI to deploy & un-deploy the entire (or partial) ONAP platform, view the different instances being managed and the state of each component, monitor actions that have been taken as part of a control loop (e.g., scale in-out, self-heal), and trigger other control actions like capacity augments across data centers.

The primary benefits of this approach are as follows:

This milestone describes a deployment and orchestration option for the ONAP platform components (MSO, SDNC, DCAE, etc.) based on Docker containers and the open-source Kubernetes container management system. This solution removes the need for VMs to be deployed on the servers hosting ONAP components and allows Docker containers to directly run on the host operating system. As ONAP uses Docker containers presently, minimal changes to existing ONAP artifacts will be required.

The ONAP on Containers project is part of the ONAP Operations Manager project and focuses on (as shown in green):

As part of the OOM project, it will manage the lifecycle of individual containers on the ONAP runtime environment. 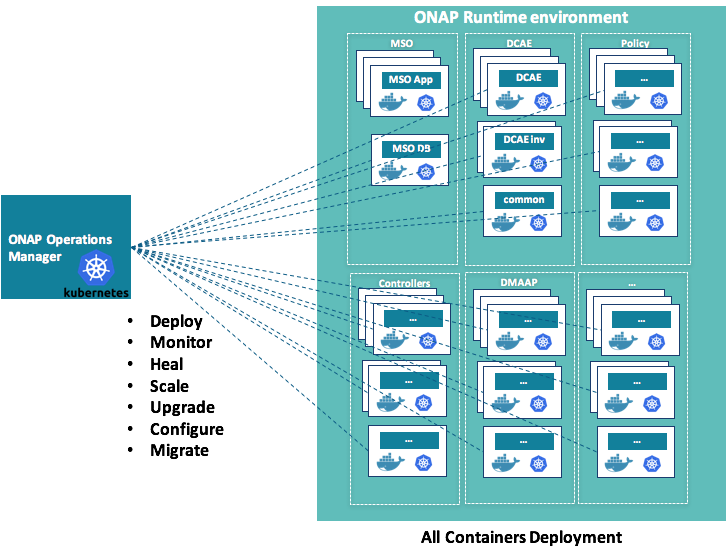 Although the current structure of ONAP lends itself to a container based manager there are challenges that need to be overcome to complete this project as follows: