This is a potential draft of a project proposal template.  It is not final or to be used until the TSC approves it.

DCAE is the umbrella name for a number of components collectively fulfilling the role of Data Collection, Analytics, and Events generation for ONAP.  The architecture of DCAE targets flexible, plug-able, micros-service oriented, model based component deployment and service composition.  DCAE also support multi-site collection and analytics operations which are essential for large ONAP deployments. 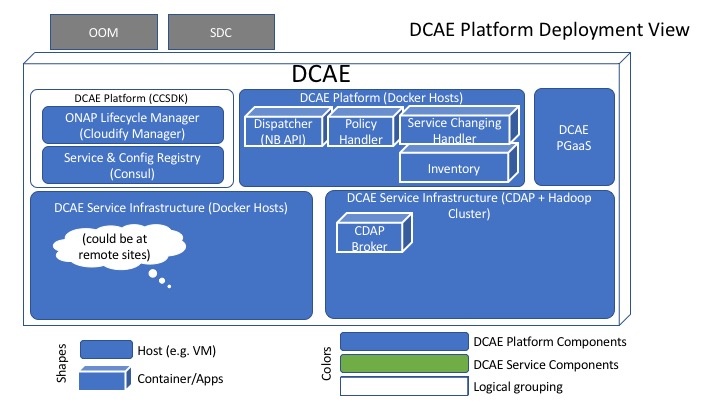 The DCAE platform is expected to be deployed through the ONAP Operations Manager (OOM).  There are two ways to deploy a DCAE system: 1. all DCAE components (both Platform and Service components) deployed by the OOM; or 2. the OOM deploys only the core DCAE platform functions, namely the Lifecycle Manager (Cloudify) and the Service & Config Registry (Consul).  Then this platform core subsequently deploys all other DCAE Platform components.  Note that the platform core is based on the same software tools that are part of the Common Controller SDK just like OOM.  Because of the multi-level responsibility structure, option 2 is more suitable for larger DCAE systems that span cross multiple sites and security and infrastructure technology boundaries.  We will use the option 2 as example in the DCAE Service component deployment description too.

Under DCAE, the collectors and analytics, either as Docker containers or as CDAP applications, will be on-boarded as Blueprints to the DCAE Platform.  At deployment time, as triggered by API calls through Dispatcher and other interfacing Platform modules, the Cloudify Manager completes the deployment of the required DCAE Service resources onto the Docker Host or CDAP Cluster that is determined by the DCAE Platform.  The illustration below depicts that the DCAE is deploying two services (yellow and red).  The required DCAE Service components are deployed onto the DCAE Platform.  In this example, the yellow service is completed by a VNF Event Streaming collector and a Threshold Crossing Analytics; while the red service consists of a SNMP Trap collector, followed by a data normalization step and a Correlation analytics.

In addition, the DCAE Platform will also configure the data paths between the Service components, i.e. by setting up DMaaP topics and configurations. 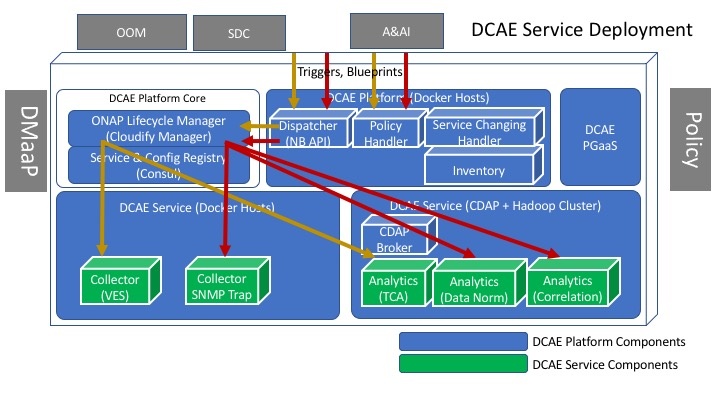 The figure below further illustrates how performance measurement and fault management data, i.e. VNF events, SNMP traps, and alert events, traverse through the DCAE Service components, and eventually depart from DCAE to reach downstream components such as ONAP Policy, or other external systems such as ticketing. 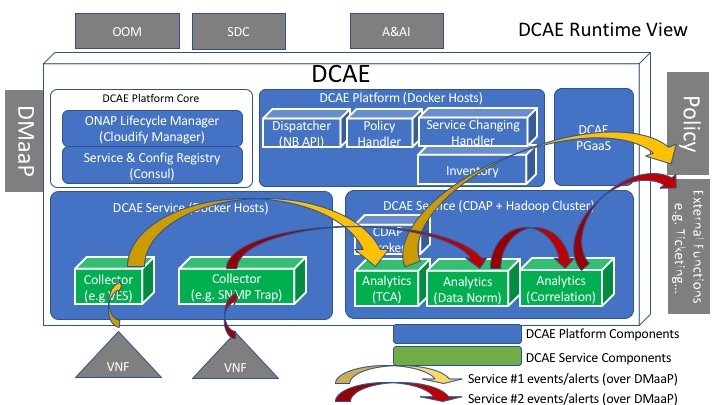 (This section is for addressing related TSC comments, not as part of DCAE project.)

Dedicated DCAE Portal/GUI is not part of the DCAE project under the current scope.  In future if such portal is deemed necessary, it may be developed under DCAE, or under Portal or VID project.  At present time, certain aspects of DCAE operation status can be displayed by utilizing a combination of native GUI/Portal of the open source software tools used by DCAE (e.g. CDAP GUI, Cloudify portal, etc), or CLAMP cockpit for a more service level end-to-end view in which DCAE is only a part, or CLI-style and RestAPI interaction for status probing.

Because of the large potential scope for DCAE, the components proposed for 4Q17 R1 are prioritized as follows:

Names, gerrit IDs, and company affiliations of the committers

Names and affiliations of any other contributors

Link to approval of additional submitters: