The Casablanca Release will be focusing on the following areas:

Describe the use case this release is targeted for (better if reference to customer use case).

The use cases supported in Beijing release will continue to be supported as part of regression assuming all other components do likewise.

APPC will contribute partially to the following use cases as part of the functional requirements.

Same as was defined for Beijing with the adding of CDT.

The long term road map is to achieve all the goals outlined in the approved project proposal; to be fully model and standards driven, be agnostics and make no assumptions about the network. Support configuration and lifecyle management of VNF/VNFC in a generic fashion so that on-boarding any new VNF/VNFC is just a matter of configuration and data. Longer term items include:

Sub-components are repositories and are consolidated in a single centralized place. Edit the Release Components name for your project in the centralized page.

APPC depends on the the following components as part of the general ONAP architecture:

For the Casablanca release, APPC has dependencies on the following three projects for specific deliverables:

Indicate where your project fit within the ONAP Archiecture diagram.

For details on the APPC architecture, refer to the APPC User Guide. 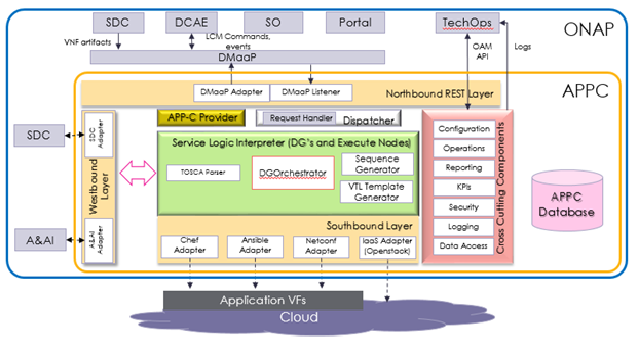