The SDN-C project provides a global network controller, built on the Common Controller SDK, which manages, assigns and provisions network resources.   As a "global" controller, the SDN-C project is intended to run as one logical instance per enterprise, with potentially multiple geographically diverse virtual machines / docker containers in clusters to provide high availability.  The project also will support the ability to invoke other local SDN controllers, including third party SDN controllers.

The use cases supported in the Beijing release are:

The Minimum Viable Product for Beijing is the set of capabilities needed to support the use cases listed above.

One critical long term objective for the SDN-C project is support for integration with other third party SDN Controllers (e.g. Open Contrail), well as integration with the SDN Agent project from Open-O.  For the Beijing release, since our primary goal is to support the use cases identified above and to improve platform maturity, the degree to which we support such integration will be dictated by the needs of those use cases.  However, we do want to bear in mind that such integration is critical and will be included in our release plans going forward.

Subcomponents of each ONAP project may be found on the Resources and Repositories page on this wiki.  Please see the SDN-C section of that page for subcomponent list of SDN-C.

SDN-C depends on the following projects:

The following diagram shows the high level architecture of SDNC: 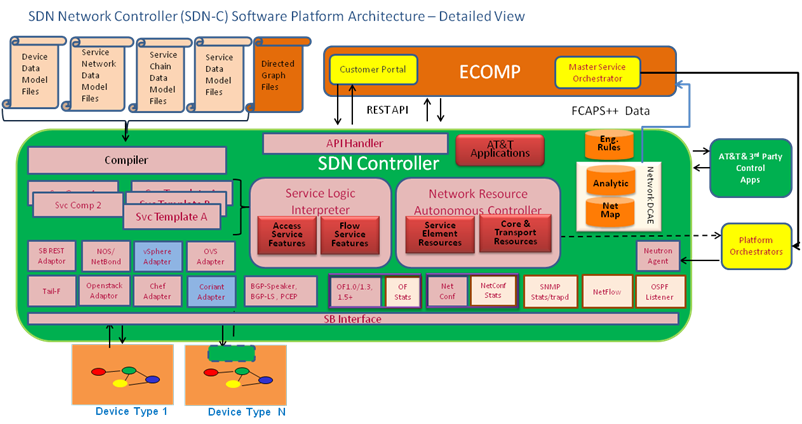 The major architectural components of the SDN-C controller are:

List the API this release is expecting from other releases.
Prior to Release Planning review, Team Leads must agreed on the date by which the API will be fully defined. The API Delivery date must not be later than the release API Freeze date.

API this release is delivering to other releases.

Fill out and provide a link toward the centralized Release Artifacts.